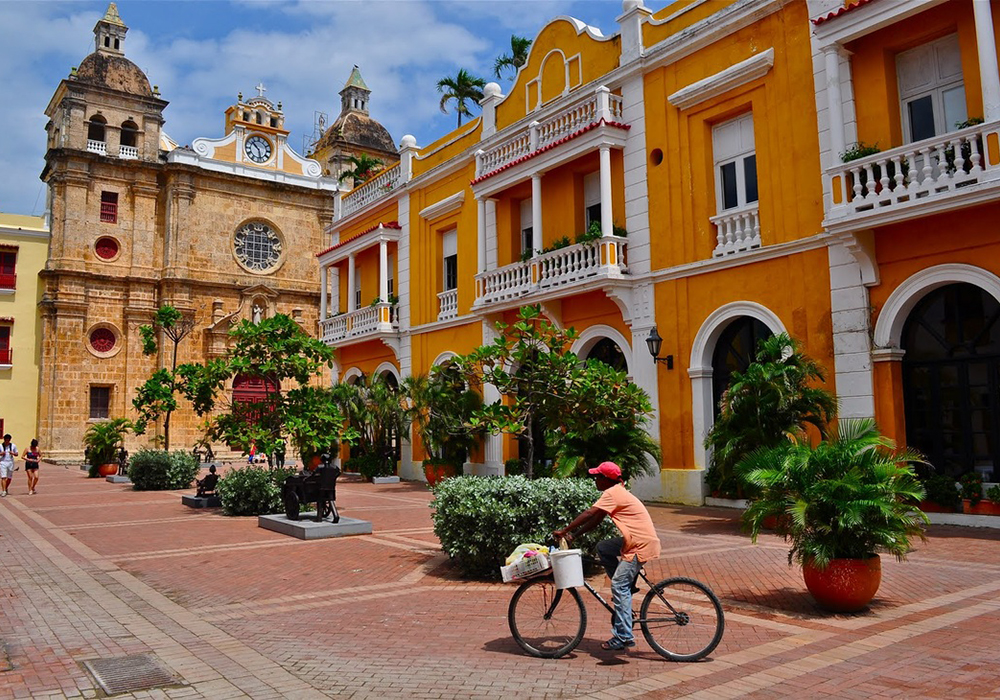 Cartagena de Indias is one of the most popular destinations on the rise in the world. Not surprising, as the city has so much to offer on so many levels!

Cartagena is one of my favorite cities in Colombia, that is why I decided to write this blog to share with you my love for this beautiful city and to give you a reason to travel to Colombia :). Also interesting to know is that the new enamel jewellery line of FLOR AMAZONA is inspired by the architecture and culture of Cartagena, more about that later on. Let me first start with a little bit of history.

The city of Cartagena de Indias is situated on the northern coast of Colombia on a sheltered bay facing the Caribbean Sea. It was founded by Pedro de Heredia in 1533 and named after the Spanish city Cartagena. It’s known for the beautiful colonial architecture, the almost 11km of walls around the historic center, one of the most complete systems of fortifications in South America and the number of festivals being held devoted to film and classical music. It’s a historical city with soul, spirit and full of energy.

Because of its outstanding universal value and its cultural significance, Cartagena was declared a UNESCO World Heritage Site in 1984. 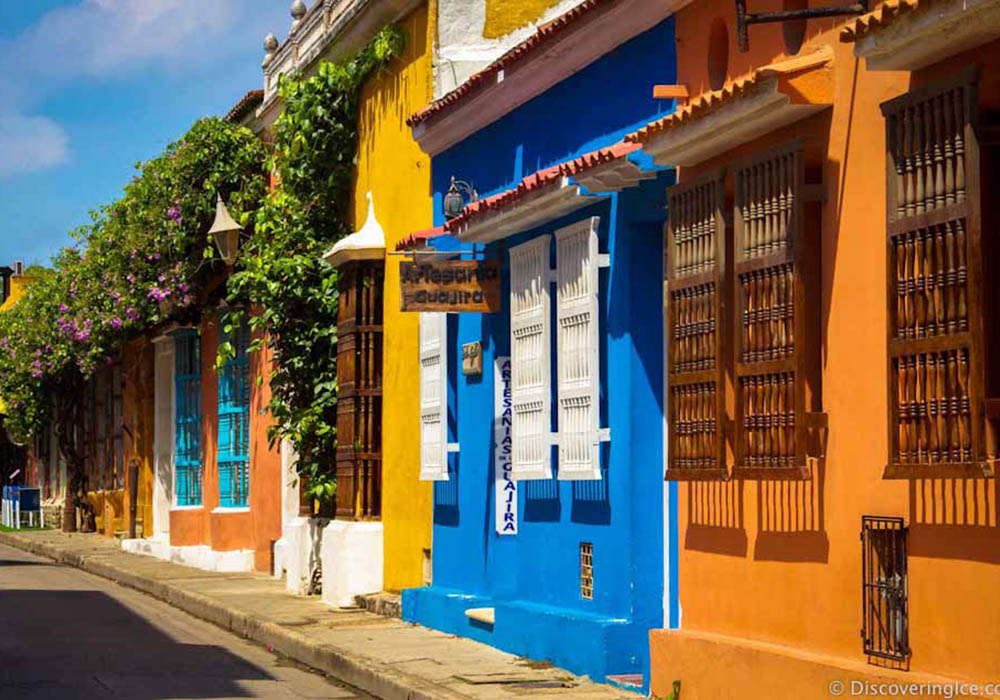 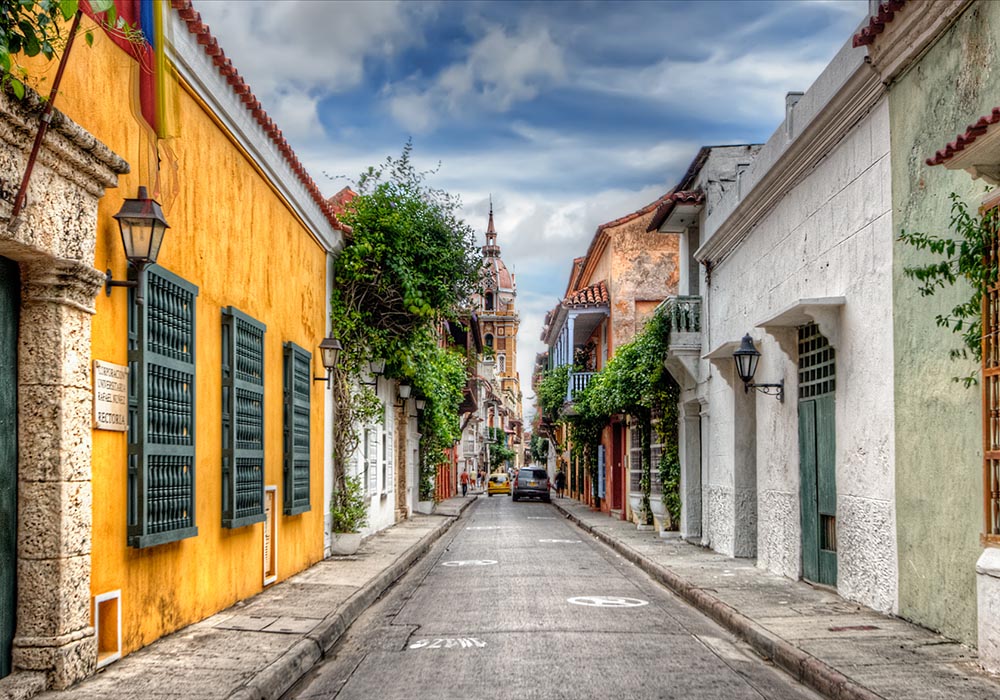 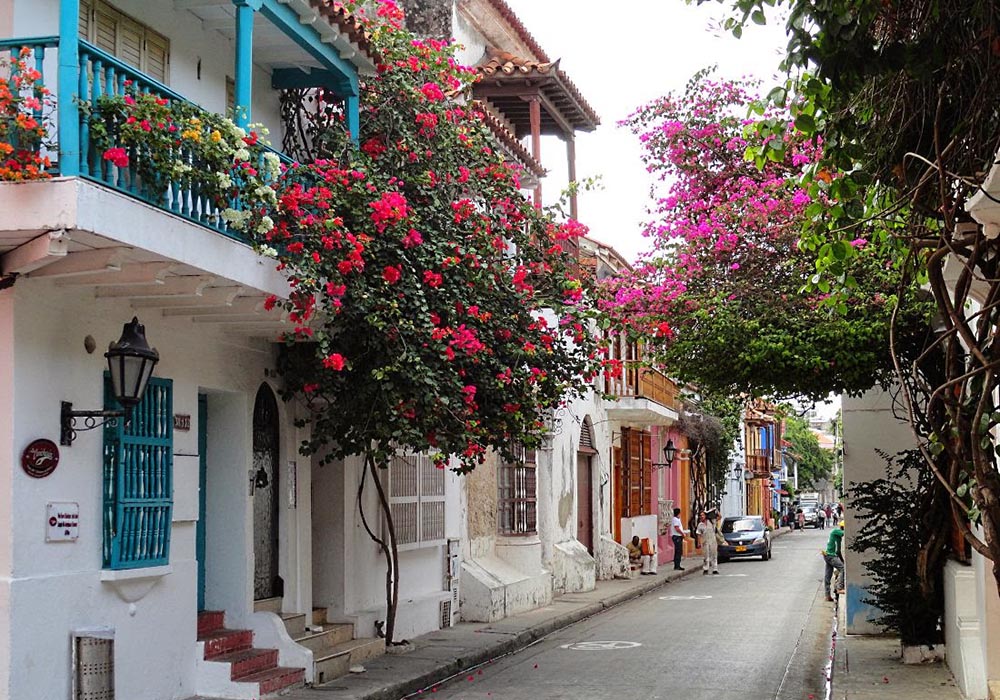 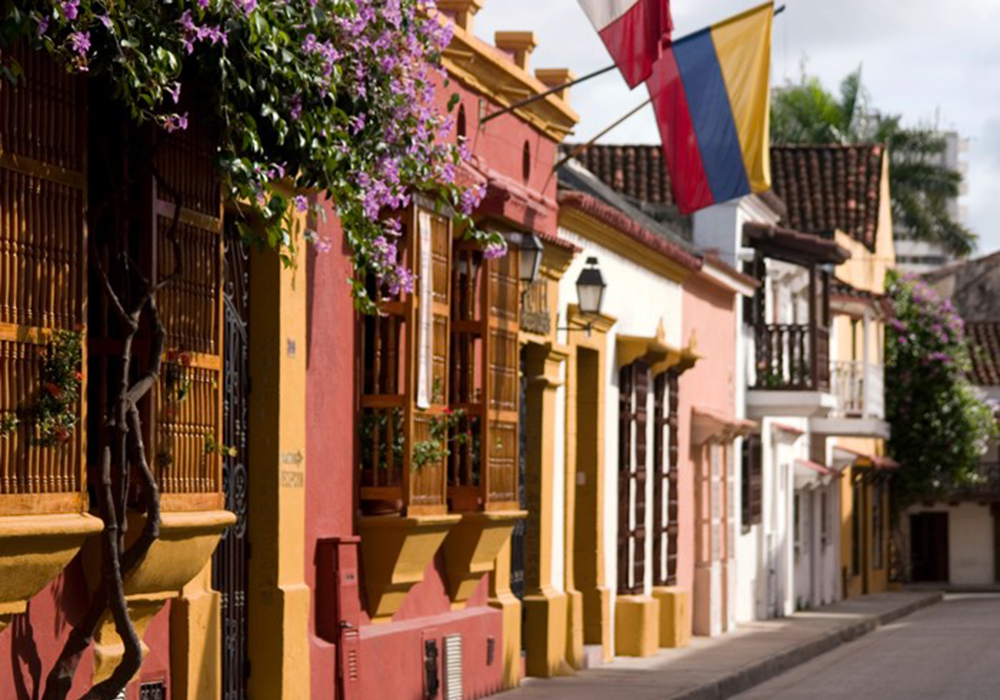 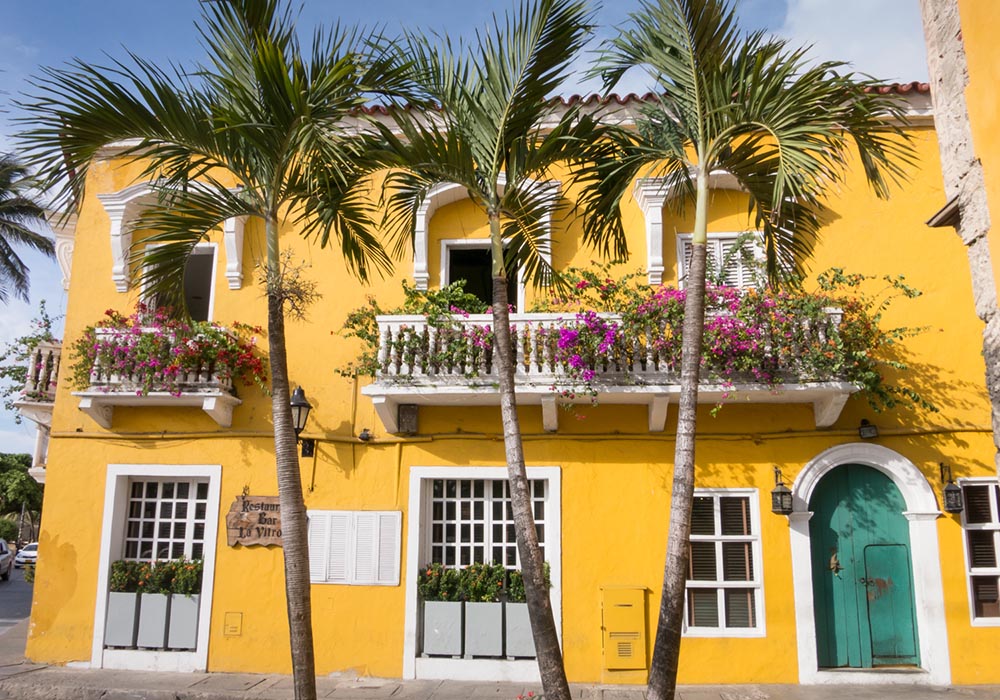 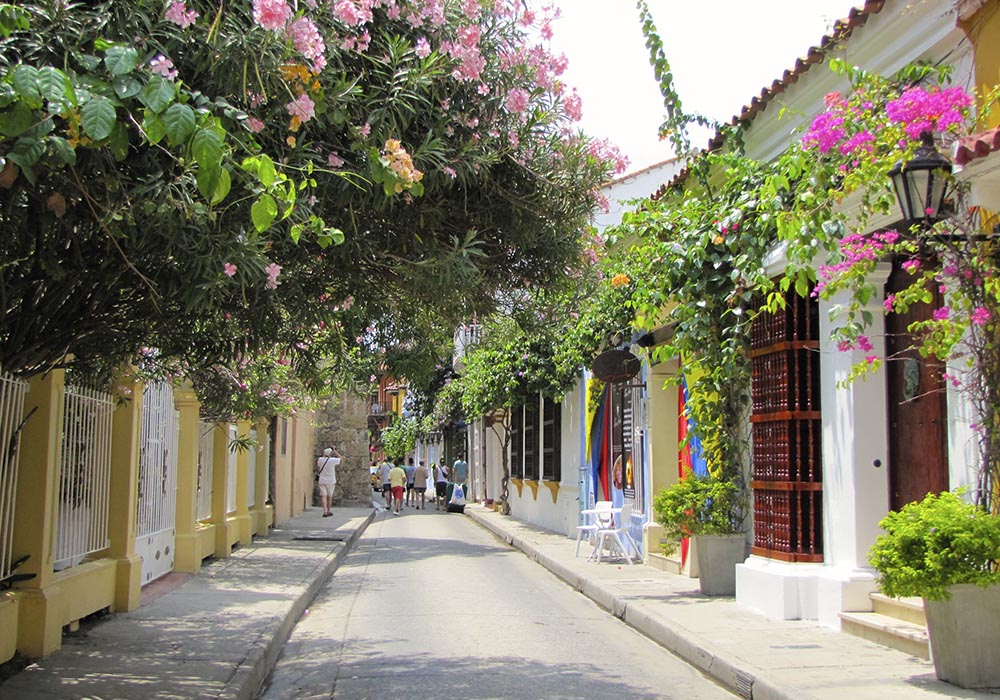 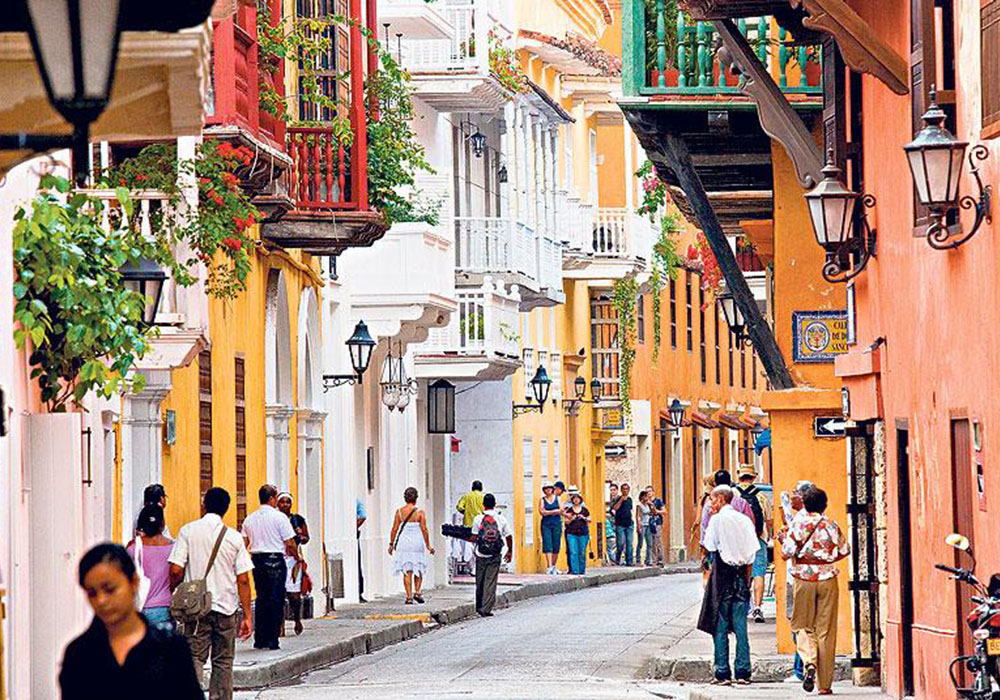 The soul of the city

Walking down the narrow centuries-old cobblestone streets of the colonial walled city is a real sensation. The boldly painted façades with overhanging balconies full of flowers are a treat for the eyes and super romantic. A Historical grandeur with many civil, religious and residential monuments of beauty and consequence.

The historic center of Cartagena, also called the soul of the city, was an important source of inspiration for the books written by the Colombian Nobel Prize winner for Literature: Gabriel García Márquez

The best way to experience the wonders of this city is to book a room in one of the exclusive boutique hotels situated in the old city. Are you travelling as a couple? Then you should definitely stay in these colonial houses, it’s so romantic! It will cost you a bit, but it’s definitely worth it 🙂

If you are travelling to Cartagena, I recommend you to stay at least a couple of days. Not only to have enough time to explore the city and its surroundings, but also to experience the fantastic nightlife. At night Cartagena becomes even more vivid. There are many restaurants and bars where you can go to. You will see people dancing and singing on the streets.

When you are travelling in a big group you should definitely book a Chiva. This colorful wooden bus is one of the biggest attractions of Cartagena nightlife with on board a dj playing Latin music and a bar serving delicious national rum.

And now, let's talk about jewellery 🙂

What I love about the jewellery of Flor Amazona, is that every single piece is inspired by Colombian art, history or culture. Like the Palenquera enamel bangles, earrings and rings. These colorful eye-catchers are inspired by the smiling Palenquera women, one of the most iconic characters from Cartagena de Indias: these ladies are dressed in colourful and floral outfits and balance a bowl of fresh fruits on their heads.

Originally, these women come from San Basilio de Palenque, a small village located southeast of Cartagena. In 2005, the village was declared by UNESCO as one of the Masterpieces of the Oral and Intangible Heritage of Humanity. San Basilio de Palenque was founded in colonial times by runaway slaves and it’s considered one of the first free towns in the Americas; and its rich cultural heritage remains to this day.

Palenquera Pink and Blue are a celebration of FREEDOM!

The tower clock and the iconic tiles on the floor and walls of the Spanish colonial houses in the old city of Cartagena served as inspiration for creating this beautiful Cartagena Tiles ring.

I am 100% sure that you will enjoy Cartagena as much as we did. Personally, I can't wait to go back! XOXO

« Andrés Carne de Res | An extraordinary place in Bogota to put on your bucket list!
Style and Stories donates to Stichting Wiesje »